In this clip, Dr. Marc Gafni talks about the use of the internet for crowdsourcing a witch hunt:

Number one, generally in a witch hunt there are multiple accusers. And, of course, today we don’t call it witch. On the Internet we often throw around psychological jargon. So, for example, I’ve had my former wife who I went through a legitimate and beautiful process of counseling with when we separated. We separated and divorced because I fell in love with another woman. She asked me to remarry her. I refused. She was in a rage. And she’s now used the Internet to hijack the victim narrative and diagnose me. So your former wife diagnoses you—but not in the therapy room—on the Web. She doesn’t call you a witch, she calls you a sociopath. It’s a new form of witch hunt. That’s completely possible on the Web, number one. 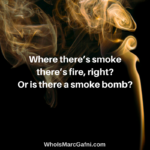 So what I’d like to talk about in the next clip is what does it mean when there’s smoke there’s fire is not necessarily true? What does it mean when there’s smoke there’s a smoke bomb? How do we actually understand why in dozens of cases the accusation is made not by one person, but by relatively large groups of people, five, 10, 12, 13, 14, 15? How does that happen? How does that phenomenon happen? Let’s take a look at it, if you’re up for it, in the next clip.