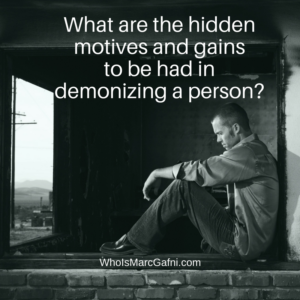 What are the hidden motives and gains to be had in demonizing a person?

Marc Gafni starts this video with the question “Why do we demonize someone?”

“In the Salem witch trials we called a woman whose femininity was threatening to the community, whose healing challenged conventions in the community, whose sexuality was out of step with the mores of Puritanism, we called her a witch.” He continues.  “And then all sorts of people would come forth with first-person testimonies, which were never checked, in order to attest to her witchcraft.”

Dr. Marc Gafni then goes on: 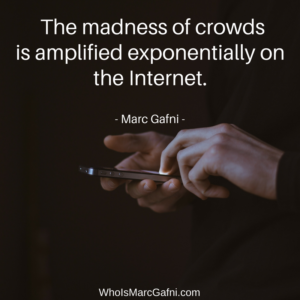 Gafni then elaborates on the three main reasons, why people demonize someone:

Second major reason, if you demonize the person sufficiently you can get up in the morning and look in the mirror better, because, okay, the complaints might have been false, but they’re such a bad person anyways, who really cares? Reason two. 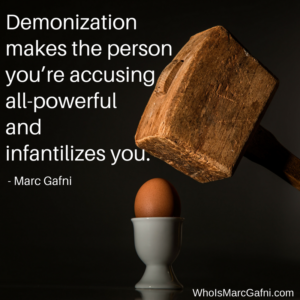 Reason three, you demonize a person because by ascribing to them demonic powers, they’re a witch, they have occult powers—part of the demonization campaign that I suffered, and it was brutal, was the amount of times it was written on the Web: he has occult powers, he has dark powers, he has demonic powers—what that does is it makes the person you’re accusing all-powerful and infantilizes you. And only if you’re powerless and they’re powerful can you then be a victim accusing them of being a perpetrator. But if you’re both powerful then there’s mutuality, then there’s responsibility. So self-infantilization takes place through demonizing the other person. Those are the three core reasons that we deploy demonization as a strategy in a false complaint story.