William Gazecki on the Sneak Attack against Marc Gafni

I’m a documentary filmmaker. As a rule, documentary filmmakers strive to find, assemble and organize credible information in order to convey the actual truth. We often take on subjects that are unknown or misunderstood in the public; not uncommonly, these are issues of the underdog – the unseen or under-reported struggles and achievements.

After telling the story of his Emmy Award winning film Waco and what he learned from it, Gazecki goes on:

In 2015, I received a call from a fabulously talented filmmaking team out of Boulder, CO. A husband and wife duo, they approached me with a project I immediately found engaging. A documentary called RiseUP! The Movie, the concept is to provide young people (“millennials”) with a new approach to success that includes ecological sustainability, service to others, original creative thinking, entrepreneurism, and a profitable income. I was intrigued and impressed, coming on-board as Picture Editor.

He unfolds the story of his work on that movie. Then, he talks about how he encountered Marc Gafni: 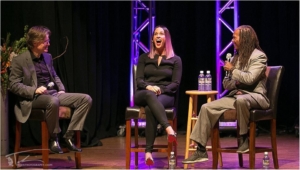 I got to know Dr. Gafni through his recorded sound bytes. He’s the co-founder with Ken Wilber of the Center for Integral Wisdom (CIW), a leading edge think tank committed to, “evolving the source code of consciousness and culture”. Big ideas, which I began to see were Dr. Gafni’s hallmark. He has a proclivity for broad, penetrating, expanded visons. Whole Foods Founder and Success Summit Presenter John Mackey (another big thinker) was the board chair of CIW for several years until he finished his term and passed the baton to, to one of the grand dames of futurism the irrepressible social activist and philosopher, Barbara Marx Hubbard. These are ambitious partners, with Dr. Gafni’s work integral throughout. Mackey, Hubbard, Wilber, Beckwith and most of the other major figures associated with the film had been attracted by Gafni and his vision.

At 87 years of age, Barbara Marx Hubbard is unparalleled as the world’s most recognized Futurist. For 50-some years she’s been an advocate of a plausible and deliberate “evolution of the species”, leading to a prodigious and epiphanous “planetary awakening”. She and Gafni share a number of core, fundamental views on how we- as beings- are put together, and what we have in us to engage (and cope with) both our personal inner challenges and the daunting macro issues we face collectively. Both embrace the profound power of Eros.

One of the many axioms Barbara and Marc hold in common is the importance and power of Eros. Eros is generally assumed to be a synonym for sex, but in fact refers to a more sophisticated, malleable energy. Eros is a much more personalized, nuanced and individuated version of chi, or prana, or “life force”. Barbara and Marc often refer to Eros as, the “evolutionary love which initiates, animates and drives all of reality” As Dr. Gafni’s book Return to Eros explains, “Eros is the principle of aliveness and magic inherent in all of reality. When you are in Eros, you have no questions about the meaning of life. You are life. Sex is the expression of the evolutionary Eros which animates and drives all of reality. Sex models for us what it means to live in Eros in every facet of our existence.” It’s a compelling mutual focal point for an 86 year old woman and a 55 year old man to share in a public teaching environment, and continues to be the basis upon which their working relationship has expanded.

As I kept editing RiseUP! The Movie, Dr. Gafni’s “dharma” (or teaching) started to take shape in front of me. Having Eros as a primary tool involves both ancient wisdom teachings, as well as plucky audaciousness. His is a cosmology of passion, connection and engagement with the world that by its nature engenders the Planetary Awakening Barbara Marx Hubbard so stoutly advocates. They have a collaborative synergy that begins with Eros but spans a gamut of transformational concepts.

William Gazecki then describes the impact Dr. Marc Gafni‘s “dharma” has on him and the people involved, until finally he tells us in-depth about the smear campaign: 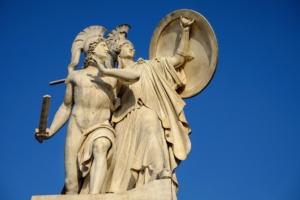 Then one day, my entire sentiment and perspective were almost destroyed. I’m sitting there editing all this wonderful material, when an email pops onto my desktop in early May 2016; it’s from the RiseUP! production team. Not expecting anything in particular, I click on a link to an online article in the Huffington Post titled, “Why You Should Boycott Marc Gafni’s Movie RiseUP!”… “Oh My God…” as it is wont to do, the adrenalin started rushing all by itself. I’m like, “what in the hell is this?” I was literally almost not able to read what was on the screen, as scandalous and derogatory as it was. Written by someone I was not familiar with, one Stephen Dinan, the article made a powerful impression. The title itself was confrontive. Given my investment in- and professional respect for- the work of Dr. Marc Gafni, the hair on the back of my neck bristled.

For one thing, RiseUP! is not “Marc Gafni’s movie”. That’s actually a naive statement. Certainly not something Gafni would say, whose is all about collaboration and Unique Self symphony. Authorship and ownership of films is a complex matter, always with teams of people utilizing shared creative input as well as multiple financing and, ultimately, ownership. In other words, other than the Director (which for “RiseUP! The Movie” is not Marc Gafni), there are no common conventions that assign the sort of ownership Mr. Dinan was attempting to disparage in his title. This alone started me wondering, “who the hell is Steve Dinan?”

But what was most aggravating was the nauseous feeling I was getting in reading the alleged expose on Dr. Gafni and what a terrible person he supposedly is. I started reading with an open mind. After all maybe I had been duped? For one thing the vitriol and unabashed viciousness was embarrassing; not for him or myself (or RiseUP!), but for Mr. Dinan the writer. You could- literally- feel the malice in the article. What was driving this? Why he felt the need to spew such antagonism in public, and for no apparent reason other than to discredit good work- and good people- was perplexing. Moreover what I read just did not resonate with my sense of who Gafni was. At this moment I had not yet met Dr. Gafni; but I did feel a sincere affinity with him, and deeply respected everything I’d been introduced to through the work I was doing.

But here is the core of my nauseous feeling. I know propaganda when I see it. You can smell it. To me, it was obvious that the attacks were constructed in a very careful and strategic manner. It’s written to evoke reactions of judgment and doubt. Using the most exploitive language, it paints Marc Gafni as some sort of narcissistic deviant, emotionally abusive sexual predator, dangerously manipulative leader, charismatic cultist, etc., etc. Which in turn tacitly assumes that those working with him (and who respect and trust him) are as well a bunch of self-deceived dimwitted blowhards. To say I was bowled over would be an understatement. I didn’t know whether to laugh at the absurdity, or be upset at the flagrant intentional smearing of Gafni and everyone around him- not to mention the outright manipulation of the reader.