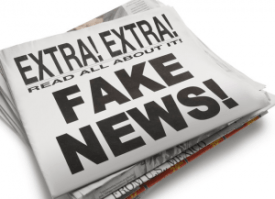 As we have seen over the past year in our election cycle, the internet has become a tool for the circulation and perpetuation of gross falsehoods and distortions. Unfortunately, we live in a post-fact society where fake news generates more engagement than truth on social media and has an enormous impact on shaping people’s viewpoints and beliefs.

I believe that the internet has created a public culture of misinformation and lies that have undermined the fundamental principles of human dignity, fair process and integrity. Instead of being a tool that we use to connect and communicate ideas that serve to unite and awaken human, social and planetary potential, the internet is being used to manipulate and divide peoples and nations.  Fake news has now become one of the easiest ways for a person, or an organized group of people to take down political, cultural and spiritual leaders.

In his TED Talk, Wael Ghonim points to 5 challenges facing today’s social media. First, we spread rumors that confirm our personal biases. Second, we create ‘echo chambers’ in which to communicate only with people who share the same beliefs as us. Third, online discussions can (and often do) quickly turn into angry mobs. Fourth, it’s nearly impossible to change our opinions once we’ve posted them since everything ‘lives’ on the internet indefinitely. And Fifth, our online experience is designed for shallow comments over deep conversations. In other words, the internet has become a forum which allows for the bypassing all of the mechanisms of justice and integrity upon which this great country is founded.

In this light, I think you will find the following case study an unnerving example that speaks directly into Ghonim’s points. You will discover how the internet is used to crowd-source a witch hunt in an effort to publicly shame and ultimately commit social murder of innocent people. And finally, you will realize the sobering truth: That this could happen to anyone, including you.

The case study I will use to make my general point is the story of Marc Gafni and his alleged sexual abuse as it has played out on the internet. It’s a compelling case that’s gained attention in the spiritual enlightenment and Jewish renewal worlds.