In this video clip, Dr. Marc Gafni distinguishes between Freedom of speech and the new phenomenon of Internet abuse, which we barely know how to engage it. 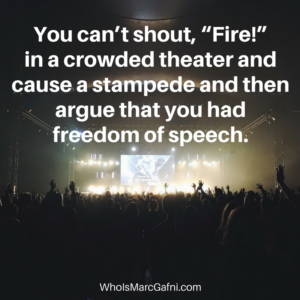 Freedom of speech is obviously one of our core values. On the other hand, you can’t shout, “Fire!” in a crowded theater and cause a stampede and then argue that you had freedom of speech.

So we need to begin to create in culture a responsibility. We might call it a culture which calls out digital abuse. The Internet needs to become an environment which promotes intimacy, that is to say good relationship, integrity, appropriate commerce, information sharing, but we need to have standards which prevent the emergence of a new form of abuse: digital abuse.

One of the most famous forms of digital abuse is cyberbullying, but cyberbullying is just one form. Digital abuse takes many forms. For example, say someone’s angry at you, in the old world what would they do? They would call five of your friends and say he or she did this or that to me. And the friends would either believe it or disbelieve it. They might pass it around. And a rumor might start, and you might have to deal with the ill effects of that rumor. And that was real. That was a real problem. As Mark Twain is reputed to have said, a lie travels halfway around the world while the truth is putting on its shoes.

But here’s the deal. That was before the Internet. In the age of the Internet, if someone’s raging at you, they don’t just call your five friends. If they’re good at search engine optimization, they can actually take out a number of websites against you. It’s very easy to take out an offshore website, which means there’s no policing of it, there’s nothing you can do against it. And they could write anything they want about you on that website and optimize it to your name, very easy to do. 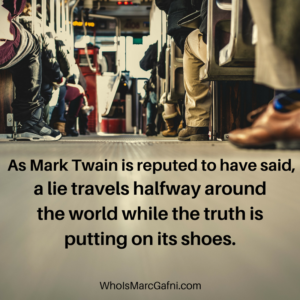 It then appears on the first page of your Google rankings, which means that that person who was disgruntled, angry at you, a former student, a former lover, a former business partner, is now speaking not just to your five or 10 or 15 or 20 friends or the people that you go to church with together or the civic group you’re involved in together—they’ve actually ranked their false critique of you, perhaps their vicious critique of you, on the first page of your Google rankings, possible number one or number two or number three in your Google rankings, which means that every single new person that you meet, whether it’s a romantic possibility, whether it’s a business possibility, whether it’s a friendship possibility, will be subject to the poison, the toxic nature of that person’s attack on you.

And of course they will be influenced by what they read, because they read it on the Internet. They don’t know who the person is. They have no way to evaluate. They have no way to do fact checking. So now what’s happened is seeded in the mind and heart of every single new person you meet is this false diatribe.

Now, Google and its engineers haven’t learned to deal with this, because if you respond to this, let’s say you now post a response which would require quite a bit of sophistication—take out an Internet site, know how to do search engine optimization—and you respond, I asked a Google engineer what to do about this and she said, “You can respond to it.” Well, by responding to it, Google then ranks the attack higher, because your responding to it shows that it’s an item of interest. There’s an engagement. Since there’s an engagement, that actually ups the ratings, the optimization of the attack.