Nancy Levine: The Art of Deception

In another post, Levine takes statements of Gafni’s completely out of context, in order to support her false claims. Gafni had written a series of tweets and given several talks during a live online broadcast, asking attendees to imagine what it might look like if we related to all our political leaders, including Barack Obama, Michelle Obama, Donald Trump, Hillary Clinton and others, as “Outrageous Lovers.” Gafni uses the term “Outrageous Lover’ to describe a person who goes out of his or her way to perform acts of kindness and love on a wide scale. To suggest that his suggestions have anything to do with sexual assault is self evidently absurd yet Levine assumes that her readers will not know the context of the quotes, nor will they have seen the post below or heard the recorded talk where Gafni discussed this topic.

We reprint it here:

A Politics of Outrageous Love 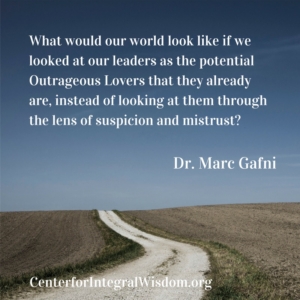 What would our world look like if we looked at our leaders as the potential Outrageous Lovers that they already are, instead of looking at them through the lens of suspicion and mistrust?

That does not mean that we abandon healthy skepticism, fact checking, or any of that. It does mean a shift in perception, in which we look for the highest in a person and through the potency of that perception, we call people to actually be their most noble self. For in truth that is the deepest yearning of every human being.

Gafni shared this thought in a several talks at Evolutionary Church and in other forums and in a series of tweets over the last couple of weeks.

Here are the tweets:

We live in a world of outrageous pain. The only response is #OutrageousLove. @realDonaldTrump is an Outrageous Lover. http://bit.ly/2hDOkDv

We live in a world of outrageous pain. The only response is #OutrageousLove. @BarackObama is an Outrageous Lover. http://bit.ly/2hDOkDv

We live in a world of outrageous pain. The only response is #OutrageousLove. @SarahPalinUSA is an Outrageous Lover. http://bit.ly/2hDOkDv

We live in a world of outrageous pain. The only response is #OutrageousLove. @MichelleObama is an Outrageous Lover. http://bit.ly/2hDOkDv

The only response to outrageous pain is #OutrageousLove. All of our hatred is unfulfilled Outrageous Love. http://bit.ly/2hDOkDv

“In November, soon after Donald Trump’s vulgar brag “grab them by the p***y” made headlines, Gafni tweeted: ‘Donald Trump is an Outrageous Lover.”

The implication of course is that Gafni is saying that Trump’s remarks about sexual assault are a form of outrageous love which he supports.

This is a typical example of the many false and distorted ways in which Levine conducts her advocacy.

The kind of Internet abuse that has been perpetrated by Levine and her associates is part of larger social challenge that we all need to engage in the digital age.

As we have seen during the last election cycle and beyond, the internet has become a tool for the circulation and perpetuation of gross falsehoods and distortions. Many editorial writers have commented on the fact that ‘fake news’ often generates more engagement than truth on social media — witness the made up ‘Pizzagate scandal’ in which a Virginia pizza parlor was targeted as the center of a sexual trafficking network — These memes have had an enormous impact on shaping people’s viewpoints and beliefs.

It has become the new normal to disseminate misinformation on the internet. Instead of being a tool that we use to connect and communicate ideas that serve to unite and awaken human, social and planetary potential, the internet is often used to manipulate and divide peoples and nations.

Fake news posts have now become one of the easiest ways for a person, or an organized group of people to take down political, cultural and spiritual leaders.